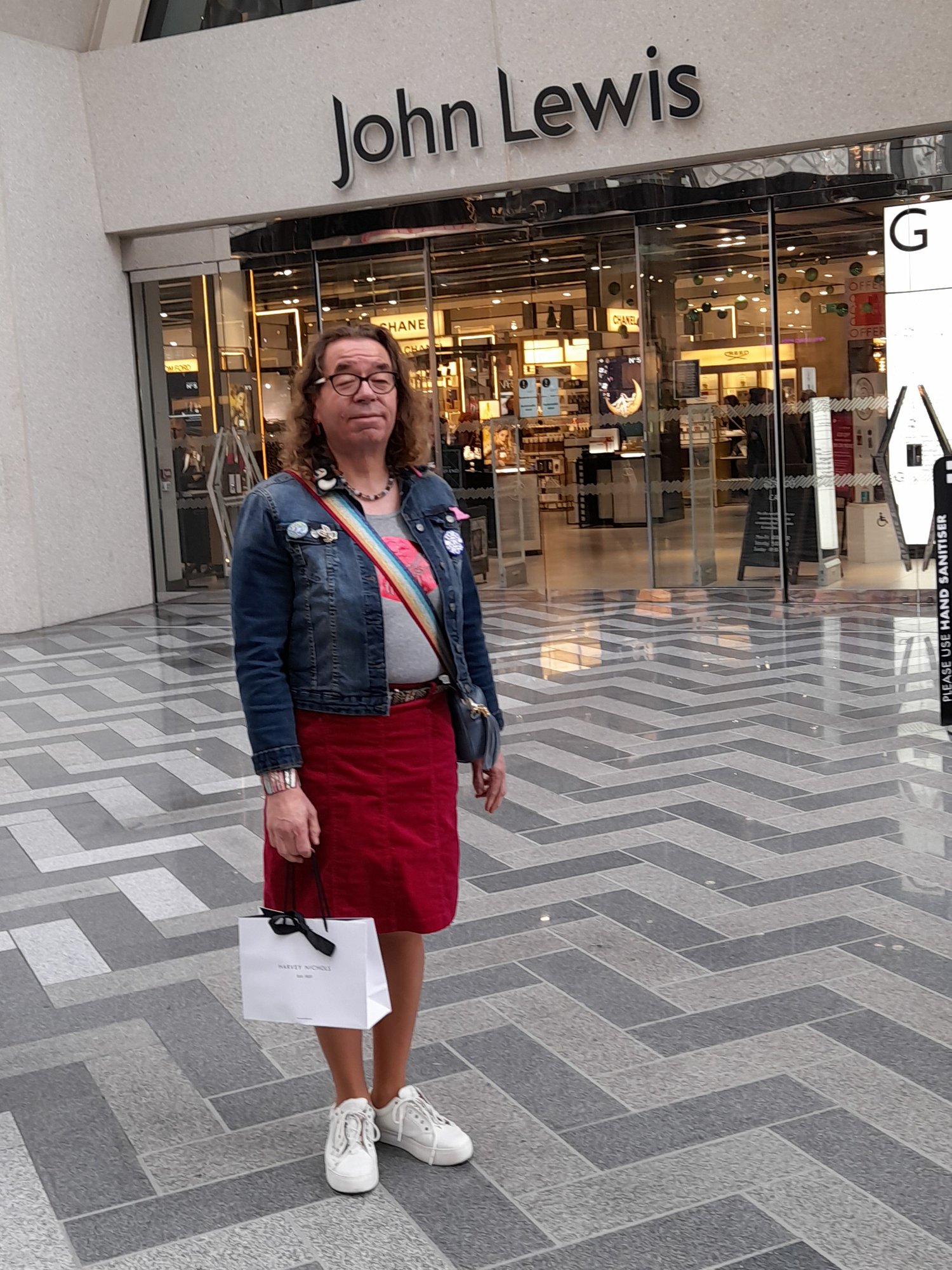 Today is a big day for me. Some might think of it as a birthday and who wouldn’t want an extra birthday? If I did, then today I would be three and leaving the terrible twos behind me. I don’t see it that way, not a birthday, but it’s an important day which I mark each year.

To get to the reason for today being so special to me we must go back in time, a long way back, to a time fifty years ago.

It was then, when I was four years old that I was hit by a terrible realisation. This is something which one moment wasn’t there and then, unbidden, it became the most important thing to me. It was at that moment that I discovered that I should have been a girl.

As you might imagine the world was a very different place back then. There wasn’t the acceptance of Trans people that we have today – not that we don’t have a very long way to go.

Back then, we hadn’t even moved towards first base. Trans was unknown and nowhere to be seen.

The only examples of men dressing as or appearing as women that I saw back then were the typical 1970’s clichés. If you were there, you’ll remember them, figures of fun, people to be laughed at. Remembering of course that back then this was one of the few ways that gay men could appear in such a public way. How different the world is today, with the likes of Drag Race where diversity is embraced and celebrated.

I knew these people didn’t represent me, but I hadn’t worked out my place in the world.

I knew that I had to protect myself and so I sunk deeply into my shell, a protective space and attitude which no one could penetrate and where I could be me safe from the hostile world out there.

In 1979 the BBC showed a documentary called “A Change of Sex” about the transition of Julia Grant.

But the way that Julia Grant was treated, particularly by those who should have been there to help was awful, mainly by her psychiatrist, the faceless and never to be lamented Dr John Randell. “A Change of Sex” sent me back deeper and deeper into my shell.

I grew up, knowing one thing on the inside and presenting another on the outside, the two never having an opportunity to be together, out in the world at the same time. Being the youngest of three siblings, time alone in the house to explore my true identity was few and far between.

I hid my true self from the world, for a full fifty years. Growing up I did boy things that were expected of me, I joined the scouts, I played rugby, cricket and the like. It was about fitting in with what was expected, giving no clue as to my true self – that was mine and I didn’t want anyone taking it away.

Happily, in my early twenties I met Claire, my partner of now over 30 years and I told her, right at the very start about me and she easily and immediately fully embraced the whole me.

This was great as for the first time when I was at home I was able to be out as me, but only at home and only when we didn’t have visitors. I wasn’t ready for the world and then, the world wasn’t ready for me. I continued to largely exist in my shell.

I don’t know what changed three years ago, I think that it was the culmination of a slow process, a realisation that I couldn’t continue to be in the world as I was. I had to break my shell open and emerge into the world.

I came up with a plan and the plan consisted of a single step – I would go outside, into the world.

An easy thing to say but it was a scary thing to do. The scariest thing that I had ever done.

Three years ago today, it was a wet day, cold, wet and windy. I was working from home, even pre-pandemic I was able to work from home, and at lunchtime, I simply forced myself to go outside and get in the car. I drove off to Halifax, parked on Albert Promenade, got out and went for a walk around. I passed people and they saw me but they ignored me.

The fears had all been in my own head.

It was a lightbulb moment. A switch had been flicked from off to on. I had nothing to fear and the world was ready for me.

In an instant, I had changed. I had gone from the worst thing anyone could know about me was that I was Trans, to it being the most important thing that everyone should know about me is that I am Trans. For too long I had kept myself hidden ever deeper in my shell – now, it’s important for me to be out there, in the world, because if Trans isn’t seen, then Trans doesn’t exist.

Quickly, I came out, a daft process that no one should have to go through, I came out to family and friends both in person, then a little later in a Facebook post where I hid a picture of the new me in an album of 60 or so other pictures. The support I got was fantastic, as one friend said to me “There’s a whole lot of love for you out there.”

People noticed and liked the new me, the happier me, the more confident me, the complete me. The me that no longer hid in a shell, a me that is out and happy and ready to face the world and stand my corner.  I was never ashamed of being Trans, that’s not why I hid from the world. I hid because I saw the world as a frightening place, full of demons and hatred and not accepting of difference.

A bit later, I had the chat at work and the wonderful Michelle in HR smoothed the way such that in January 2020 I was able to go into work as me with the full support of the company behind me. I even did a company wide presentation with Q+A on the International Day of Trans Visibility, something that even a few months before would have been way beyond my wildest imaginings.

We hear lots of stories about the bad things which happen, and they are truly awful. But I want this story to show that there can be another side, a side where good things can happen, a side where finding acceptance of yourself can lead to acceptance from others.

There’s a lot of good people out there in the world and I’m both happy and lucky to have met many during my journey.

Most people take living their identity for granted, in fact they never even think about it, they don’t have to. But for some of us, the mere act of being able to be who we really know ourselves to be, well, it’s the most important thing going. I’ve reached my happy place and here I will stay.