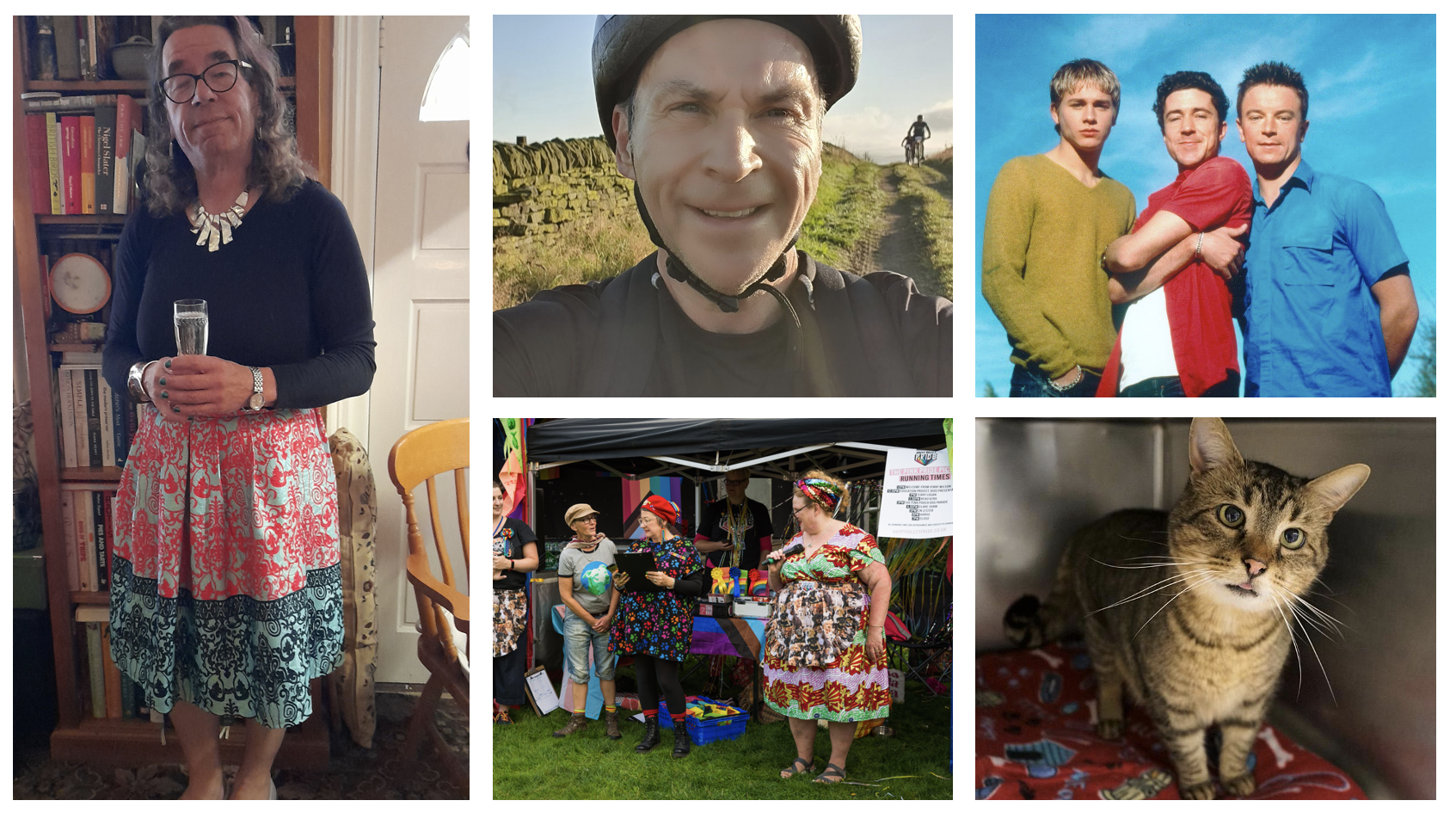 David tells us about their annual Tranniversary

"This is about how I came out to Claire, my life long partner, biggest friend and ally. I hope that you find this a happy story and it makes you smile.

I grew up knowing that I was Trans. This was during the 70s and the 80s. I knew that I was always going to be Trans.  It was a different world back then. Trans didn't exist openly in the world. We didn't really have the word Trans back then.  To the world, had they known, and even to myself, I was a transvestite and being a transvestite was a sordid and shameful thing to be. A thing to be mocked; why would a man want to wear ladies' clothes? It was difficult and it was kept hidden and I told no one.

I also knew that I didn't want to live alone. I wanted to live with a partner. I wanted to have a job, own a home, have a 'normal' family life. And I was Trans.  I would always be Trans. I knew that I could not keep it a secret. I would have to tell anyone that I was going to be with, about me. I knew that I would have to tell at the very beginning, before any bond had been made, while it was at its easiest for us both to move on should the other not be able to cope. When at Huddersfield Polytechnic I had a couple of student flings, it was the thing to do, but I knew deep down that I couldn't tell these people about me and so, for me, the relationship had no future and I ended them, fairly abruptly in one case. The problem was I couldn't say what had changed and why we could no longer be together.

Then in October 1987 I started a new job. I was the new boy. At 10:15am on Monday, 26 October I was introduced to Claire, an old hand, she'd been a civil servant in the Department of Health and Social Security for all of three weeks. We were introduced when Tracey, the trainer, asked Claire "Will you take the new boy to tea?"

Neither of us knew that our lives had just changed forever.

Anyway, for the next five months, I wasn't in the civil service for very long, we worked together and got on really well. When we arrived at work in the morning to when we finished in the afternoon, we just had a great time. We just got on and hit it off.

Then at the end of March I got a new job. I came in one morning and told the office that I was off and would be seen no more. At this point I didn't know how Claire fitted into any future plans. But that was all settled when on April 7th she invited me over to her flat for a curry evening and we got together. We still celebrate April 7th each year with a curry, but this story isn't about the Curriversary, it's about something else.

Fairly quickly we decided that we'd go on holiday together. It was going to be camping in Northumberland.  I had grown up with camping holidays being the norm. Claire had never been camping before. I hoped that she liked it. The holiday was set for the end of September.

Over the weeks and months before the holiday, we got to know each other really well. We were alike on many things, and for the first time in my life, I began to think that here was someone that I could tell about me, the real me, and not be rejected. I could not know that for certain, but I was in a place where I could be as confident as I could be.

September came and we had a wonderful week up in Rothbury. Claire took to camping like an old hand. We could tell, both of us, that things had moved on. This looked like being a long term thing.

It wasn't planned. These things seldom are. It was the last night of the holiday. We were drinking pints in the pub. As the evening progressed, it was growing inside me. I knew what I had to do. At about 10pm I got to the point when the need to act became too great. The dam burst. This was it.

"I've got something to tell you."
"OK, what is it?"
The pub was quite full so I had to say "I can't tell you in here. We need to go outside."  I didn't want what I was about to say to be overheard.

We got up, leaving our half finished pints on the table.  We went outside.  I had only two thoughts:  I absolutely need to say this;  This might be the end of it all, I might not see Claire again.   I did however have hope, and I thought with good reason.

Out in the pub car park, I looked at Claire and said the only words that I had available to me "I'm a transvestite."
"Is that it?  Can I go and finish my pint?"

I felt like Laura Jesson in 'Brief Encounter' when Fred is kind to her, though we know, and Laura knows, that Fred knows, and she breaks down saying that she's been an awful fool worrying about nothing, because Fred is so wise and kind.

And that's what Claire's ten words said to me.  In one sentence she showed that she accepted and understood and that she was there for me and had no problem with me being me.  Claire was my Fred Jesson.

June tells us about her life with her cat, Denise

"I moved to the Calder Valley about 10 years ago with my then-partner. We quickly settled in here, enjoying the vibrancy, the people and the parties! Sadly our partnership was not to last, but the last thing we did together was get a cat, a rescue tabby called Denise. Denise is getting a bit old and grumpy now but she's seen so many changes in our busy town, I often wonder what she thinks. I would love to read Denise's autobiography. I now look forward to sitting on our garden bench together for years to come, watching the world around us change some more."

LGBT+ History Month made Malcolm reflect on one of his favourite TV shows.

On 23 February 1999, the world changed for so many people. That night eyes were opened, jaws were dropped and for many people something clicked! It was frank, funny, exciting and optimistic. It was colourful and bright. It was explicit and confident. It really was something that had never been seen before.

Things pre QAF were moving slowly in the right direction but this was such a gigantic leap forward. So much has changed since then, and it was a real turning point in terms of attitudes and representation. Things didn’t shift overnight of course but this was a pivotal moment.

LGBTQ+ representation on TV and film is a world away from what it was - always remembering that more needs to be done."

"I grew up just outside of London and throughout my 20s worked right in the heart of the bustling streets of Soho. I specialised in Marketing - the hours were long, the clients demanding, the commute a drag, and I began to long for a more peaceful, settled environment. I'd read about Hebden Bridge and the Calder Valley in several articles and knew that is was a place where LGBTQ+ people were accepted and celebrated. I came up to visit in the summer of 2018 and happened upon the Happy Valley Pride Festival. What a lucky cooincidence.  I fell in love with this remarkable community, full of artists, alternative lifestyles and queer people like me. I immediately knew i'd found the place where I wanted to spent the rest of my life. i started looking out for jobs and in 2019 I moved here fulltime. Since then, I feel like i have had the space and time I needed in my life. I bought a dog, Mr Tootlepip, and most importantly met the love of my life. We've just moved in together. That's my history in Hebden so far."

Helen talks about the friendships she has made in our valley

"LGBT+ History Month makes me think of my Happy Valley mates, friends, partners in crime, fellow committee members, besties and weirdos. I met them all through Happy Valley Pride (except my wife-we’d already met) and they changed my life, for the better so in LGBTQ+ history month I’d like to say a big hiya and thank you to all of them."

Warren tells us about his new life in Hebden Bridge

My history of living in the valley is pretty short as I only moved here in September 2020. However for me it's the spectacular countryside and getting out and about on the mountain bike. In 2021 I took on the Calderdale Mountain Bike Marathon which was spectacular.